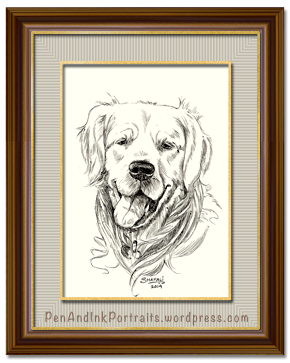 This is what Dean Koontz once said about my kind:
“Golden retrievers are not bred to be guard dogs, and considering the size of their hearts and their irrepressible joy in life, they are less likely to bite than to bark, less likely to bark than to lick a hand in greeting. In spite of their size, they think they are lap dogs, and in spite of being dogs, they think they are also human, and nearly every human they meet is judged to have the potential to be a boon companion who might, at many moment, cry, “Let’s go!” and lead them on a great adventure.”

I am a Golden Retriever, or a Goldie as we are called by those who love us. We were originally bred as gun-dogs for retrieving the game during the hunting sessions. Taking our training sessions seriously is in our genes. We are obedient and loyal, and when we are young, we are little bundles of energy. And yet, quite like the humans, we too become obese with age, especially, if were aren’t given enough opportunity to exercise. We love water, so if you’ve got a pool or if you live near water, we’d love to be your guests.

I don’t really have to emphasize that we are very friendly and affectionate, and we are gentle with children. You can call us family dogs. Because of our gentle nature, we also work as therapy dogs.

Anyone who’s lived with our kind, would tell you that we are very intelligent too and so we find employment as service dogs for the elderly.

Let me begin with the obvious. We are super-beautiful. A few other details:

You can read more about the physical and other characteristics of the Golden Retriever here.
We’ve starred in movies too. (obviously because of our striking good looks and our intelligence.)

Here are some movies with Golden Retrievers as main characters:

And now a little about Buddy…the famous Golden Retriever Actor:

Buddy was a Goldie who acted in films and TV Serials. He is remembered for his role as Comet in Full House Television Series. Buddy’s owner found him as a stray dog and later trained him to play basketball, baseball, football, soccer, and hockey. He has acted in the Air Bud series of movies (also called Disney Buddies)  in which he has demonstrated his sports skills.

This of course doesn’t mean that our heroics begin and end on the silver screen. Following are some real-life Golden Retriever Heroes.

In 2004, a 7-year-old, Brutis (not Brutus, it’s an important distinction and so I emphasize it here,) saved a child from a coral snake. In the process Brutis got fatally bitten by the snake which left him almost dead. His heroism was recognized and he was flown to Los Angeles where he received National Hero Dog Award.

Read the whole story about how Brutis saved a child from a deadly coral snake here.

This 4-year-old service dog helped save life of his paralyzed ex-soldier companion who found his wheelchair stuck in a muddy field.