I don’t have to tell you that I am a cat, because unlike dogs, we don’t suffer from any sort of identity crisis. In fact, a human called Mark Twain had this to say about us.:
“Of all God’s creatures, there is only one that cannot be made slave of the leash. That one is the cat. If man could be crossed with the cat it would improve the man, but it would deteriorate the cat.”

I agree with Mark Twain. We are superior. Period. 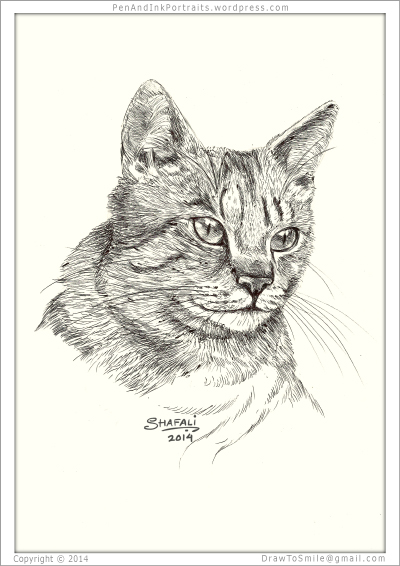 Let me tell you about my kind of cat – the short-haired tabby… or the Puss-in-the-boots.

Short-haired cats have coat-hair that’s a lot shorter than that of the Longhair cats. Their hair grows no more than 2.5″ while the hair of the long-hair could grow up to a length of 5″. The gene for short-hair is dominant and so you see more short-haired cats than the long-haired ones. This gene-dominance could have evolutionary genesis too because in the wild, short hair prevents their hair from getting tangled in the bushes. In homes short hair cats are low-maintenance as their hair doesn’t get tangled and they have to be brushed less often. Read more about domestic short-hair cat facts.

A tabby cat has stripes or spots in their coat. These markings come in different colors such as black, brown, tan, or blue. One of the more distinctive feature of a tabby cat is that on their foreheads they have a pattern resembling the letter M. You can read more about different colors and patterns of tabby cats here.

The Amazing Flexibility of Cats!

Cats are super-flexible – and we know that because a cat always lands on its feet. This ability comes from its spine which has muscles binding it together. In contrast the human backbone is bound by ligaments instead of muscles. Additionally, the cats have twenty-six more vertebrae than humans. This makes their spine relatively longer and provides them more freedom to turn. There’s another important characteristic of their anatomy, which makes the cats more flexible. The shoulder of the cat is structured in such a way that it gives its forelegs the ability to move in any direction.

Tard – The Grumpy Cat is a real cat whose real name is Tardar Sauce. She has earned the nickname of “The Grumpy Cat” because of the unusually grumpy expression that never leaves her face. Tard became an Internet celebrity when her owner’s brother posted a picture of hers and it went viral. Believe it or not – the Official Grumpy Cat Facebook page has more than 5 million likes! Grumpy Cat has appeared on Today, Good Morning America, CBS Evening News, Anderson Live, VH1’s Big Morning Buzz Live, The Soup and American Idol. She has featured on the covers of Wall Street Journal and New York Magazine too.

Here is a link to the web page of the Grumpy Cat.

Talk about being famous…only a cat could become famous for a grumpy face!

Imitation is the Best Form of Flattery

Before I end this post, I want to re-emphasize that you may try all you want, but you can never achieve the grace and the flexibility of a cat – not even when you are Halle Berry.

If you are wondering what I am talking about, you haven’t heard of the Catwoman.
The Catwoman, I assure you, couldn’t hold a candle to a real cat. A real cat, on the other hand, could walk away with an Oscar for playing the role of a Womancat!

What’s your opinion?
(Not that it matters…not unless you are a cat!)

← The Gentle & Sensitive Rough Collie
The Forever Pup – The Boxer →